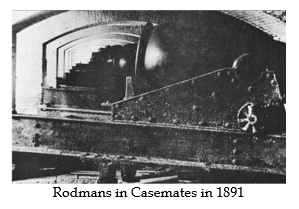 One drawback to the current state of Fort Taylor is that its magnificent inventory of guns is only partially visible.  The picture at right is a view of one of the casemate galleries at Fort Taylor in 1891 showing a line of 10-inch Rodmans exactly as they were at the end of the Civil War.  Note how shiny each of the gun tubes is – most likely a testament to the care of the gunnery sergeants left in charge of the Fort between 1872 and 1898.  The wrought iron carriages and chassis show some signs of corrosion due to the salt environment of the Fort. 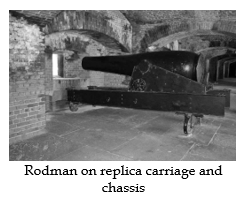 Before he retired, Howard England designed a replica casemate carriage and chassis for one 10-inch Rodman which was built a number of years later.  The picture at left shows this installation in Gun Room 42.  Although built of modern steel plate and beam, the gun tube is an original Rodman dug out of one of the Gun Rooms on the South Face.  In the past it has been used in a number of re-enactments and can be operated exactly as the original was in the Civil War.

The Army began placing guns into Fort Taylor in 1855 and continued to do so until the formal end of hostilities in 1866.  After the war, there apparently were a number of minor changes, but the total number of guns remained about the same.  The 1873 inventory of guns at the Fort showed it contained 139 guns of the following types: 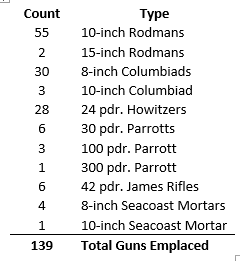 An additional six 15-inch Rodmans were emplaced in the North and South Sand Batteries on the shore.  With the exception of four 10-inch Rodmans and the 24 pounder Howitzers, all of these weapons and their carriages and chassis were buried in either the gun rooms of the First Tier of the South Face or in the concrete of the front of Battery Osceola where Howard England later found them beginning in 1969.  When he ended his excavations in October 1976, he had discovered more Rodmans and Columbiads than almost all of the other Forts on the East and West Coasts of our country.  He was even called “Mr. Rodman” by a number of nationally known Civil War armament experts for all of his discoveries!

Five 10-inch Rodmans, one 8-inch Columbiad, two 10-inch Columbiads, one 300 pounder Parrott Rifle, and one 8-inch Seacoast Mortar are on display on the First Tier of the North Face.  An additional 8-inch Columbiad is on display at the beginning of the sidewalk leading to the Fort.  A total of six guns are visible in the top level of the concrete face of Battery Osceola: five 10-inch Rodmans and one 300 pounder Parrott.  If access was allowed into the gun rooms of the South Face, additional guns can be seen also buried in the lower level of the concrete face of Battery Osceola.  But these have never been included in the inventory of guns discovered at the Fort.  Perhaps future excavations in the gun rooms of the South Face will reveal additional buried Civil War treasure.  One 10-inch Rodman was moved to Fort Clinch in Fernandina Beach in the 1990’s.

In World War II, the Army added two 90-mm Anti-Aircraft Guns to the Fort.  They were emplaced to counter motor torpedo boats which might have attempted to enter the Key West harbor.  The two guns were subsequently removed in 1947.  Only their gun bases remain today.

The following section provides data on the guns found by Howard England and his “sand hogs” at Fort Taylor: 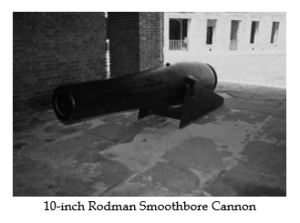 The most prevalent gun emplaced at the Fort and the most often discovered during the 1969 to 1976 excavations at the Fort was the Model 1861 10-inch Rodman (also called a Rodman – Columbiad).  By the end of the Civil War, these were emplaced on the First, Second, and Barbette Tiers of the Fort.  They were used exclusively on wrought iron casemate and barbette carriages.  They were first brought to Fort Taylor in 1863 during the Civil War.

Vital statistics for the 10-inch Rodman include: 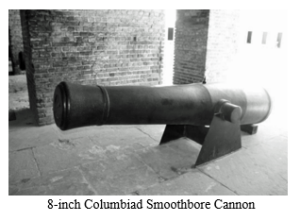 The Columbiad was invented in 1811 by Colonel George Bomford, United States Army.  Columbiad cannon were first used in the War of 1812.  Columbiads were then used by the United States coastal artillery all the way until the early years of the 20th Century.  At Fort Taylor, they were used primarily on the Second Tier seaward curtains and were mounted on wooden casemate carriages.   Some of the first 8-inch weapons were later transferred to Fort Jefferson to begin to equip that valuable defensive position. The first weapons brought to Fort Taylor in 1855 were the 8-inch Columbiad smoothbore cannon.  The Columbiad was a large-caliber, smoothbore, muzzle-loading cannon able to fire heavy projectiles at both high and low trajectories.  This feature enabled the Columbiad to fire solid shot or shell to long ranges, making it an excellent seacoast defense weapon for its day.

Vital statistics for the 8-inch Columbiad include: 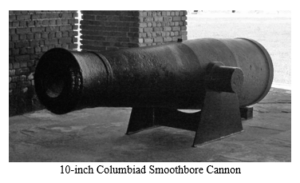 10-inch Columbiads were late additions to the inventory at Fort Taylor.  Also designed by Colonel George Bomford, United States Army.  They were added to Fort Taylor’s armament inventory during the Civil War and were used primarily on wooden barbette mounts on the terreplein.  The two discovered by Howard England were found buried on the top of the South Face lying on the original slate floor covered over by sand and dirt.  You can tell that these guns were employed on wooden carriages by the longer trunnions versus those on the Rodmans which were used only on thinner wrought iron carriages.

Vital statistics for the 10-inch Columbiad include: 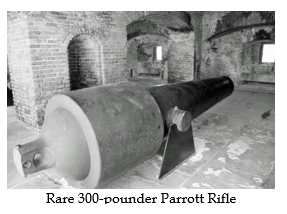 Parrotts were manufactured with a combination of cast and wrought iron.  The cast iron made for an accurate gun tube, but suffered fractures due to its brittle cast iron.  Parrott’s genius was to install a large wrought iron reinforcing band overlaid on the breech to give it additional strength.One of the largest and most accurate of the weapons emplaced at Fort Taylor during the Civil War was the 300-pounder Parrott Rifle.  The gun was invented by Captain Robert Parker Parrott,a West Point graduate who resigned from the service in 1836.  Parrott became the superintendent of the West Point Foundry in Cold Spring, New York.  He created the first Parrott Rifle (and corresponding projectile) in 1860 and patented it in 1861.

In 1873 there was only one on the inventory – like the one pictured above that was found by Howard England in 1971.  While the contractor building Battery Osceola was moving this gun, the lifting band around the muzzle broke.  The gun dropped some distance falling onto the floor of the Second Level of the South Face.  It hit with such great force that it broke through the floor over Room 14 below.  The Army Corps of Engineers apparently left it there and simply covered it over by dirt rather than try to move it any farther.  It may have been employed on the Barbette Level immediately above where it was dropped.  When my Dad was excavating Room 14, he discovered the muzzle of the gun poking through the ceiling of the room as well as brick and concrete fragments from where it had broken through the Second Level floor.  He then was able to excavate the fill above Room 14 and remove the gun from.

Note: There is another 300 pounder still entombed in the concrete of Battery Osceola.  It is directly in view from the vantage point on the top of the Battery.  One of the two Parrotts was probably added sometime after 1873 since two appear on the 1892 inventory.

Vital statistics for the 300-pounder Parrott Rifle include: 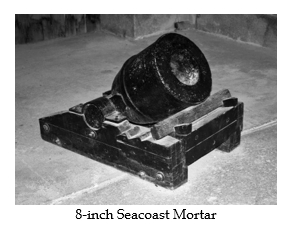 Four 8-inch Seacoast  Mortars were emplaced on the Barbette Level of the Barrack to protect the Fort from land attack.  Guns were intended to breach the walls of fortifications during a siege through direct, low angle fire.  Mortars, on the other hand, were designed to lob explosive shells in high arcs over the parapets of fortifications, inflicting casualties among those sheltering inside the fort.  They were also intended to destroy resources behind the Fort’s walls.

Mortars could kill men inside, and force others to stay under shelters, or prevent the crews from servicing their guns and repairing damage caused by the bombardment.  Mortars could also destroy structures inside the fortification such as barracks and kitchens which would normally stay unharmed from standard guns.  Heavier mortar shells could penetrate magazines and many bombproof shelters.Four 8-inch Seacoast Mortars were emplaced on the Barbette Level of the Barrack to protect the Fort from land attack.  Guns were intended to breach the walls of fortifications during a siege through direct, low angle fire.  Mortars, on the other hand, were designed to lob explosive shells in high arcs over the parapets of fortifications, inflicting casualties among those sheltering inside the fort.  They were also intended to destroy resources behind the Fort’s walls.

The 8-inch Seacoast Mortar was discovered by Howard England when he excavated the two 10-inch Columbiads on top of the South Face.  It is the only one of the four known to have been at the Fort from Civil War times down to the Spanish-American War era.

Vital statistics for the 8-inch Mortar include:

During the period of active excavation at Fort Taylor, Howard England discovered the following guns either in the filled casemates of the South Face or embedded in the concrete structure of Battery Osceola: 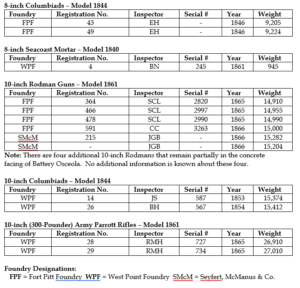 OTHER GUNS AT FORT TAYLOR

Although no examples of 30-pounder Parrott gun tubes were found during my Dad’s explorations, they are definitely represented by several hundred 30-pounder bolts discovered in the digging.  These are very rare and hard to find, but the Fort has several hundred in its archives.  Also, he found numerous 100-pounder bolts among the thousands of rounds of ammunition that was buried in the lower rooms of the South Face.  Dad believed that these guns were entombed in the face of Battery Osceola, but he never had the chance to find them once excavations were stopped in 1976.