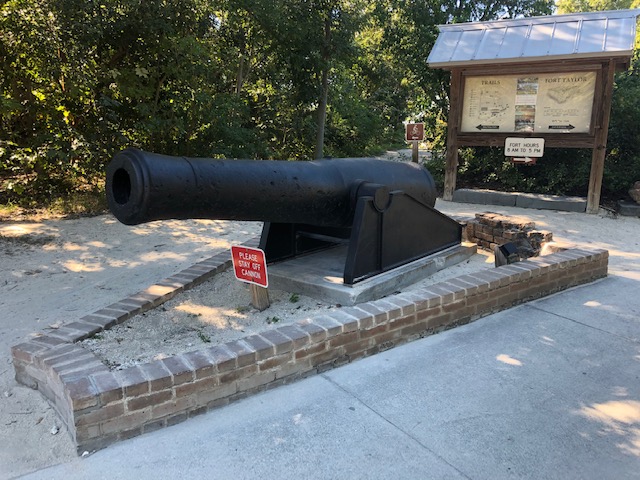 The self-guided tour of Fort Taylor begins at the large cannon placed by the sidewalk as you come from the Fort parking lot and enter the Visitors Corridor to the entrance to the Fort.  This is one of the two 8-inch Columbiad cannons found at Fort Taylor.

The following diagram shows the layout of the markers beginning at the lower left with the  H  and continuing on in numeric order until reaching 11  . 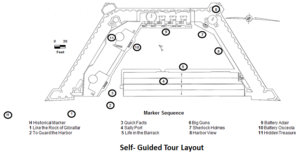 The first stop on the tour is the Historical Marker on the left side of the sidewalk on a short gravel path.  Placed there in 2008, it was sponsored by the Florida Park Service and the Florida Department of State to memorialize the history of the Fort.  It gives a overview of the history of Fort Taylor and provides an excellent vantage point of the Southeast Bastion of the Fort and the moat surrounding much of it. 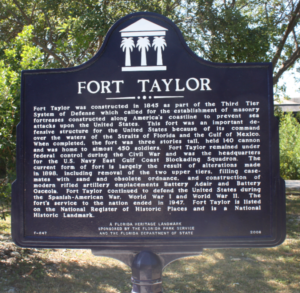 r, one part of the nature hike around the Park is visible.  It takes you along the moat and on a 1.2 mile (1.9 km) hike around the entire property.  Be sure to take a hat and wear some sunscreen since all of the hike and tour of the Fort is mostly out in the glorious tropical sun ever present in Key West.

The tour continues up the sidewalk toward the entrance to the Fort and focuses on a series of Wayside (or Interpretive) Markers installed in 2016.  Begun in 2013 with a gift from the family of Howard England, the current 11-marker program expands and highlights the history and significance of the Fort.  The markers are, for the most part, ADA-accessible and strategically placed in locations with a view of the section of the Fort being described on each panel.