Moving along to the left from Battery Adair, you will come to the marker illustrating the armaments of Battery Osceola.  Construction of this battery began in 1898 and was completed in late 1899.  Battery Osceola was the primary reason that Fort Taylor was demolished from two-and-a half to one-and-a-half stories.  Its height was reduced not only to make Batteries Osceola and Adair harder to spot at a distance but also to provide the field of fire that the new guns required.  The weight of the Model 1888 12-inch Non-disappearing ssssssssssssssssssssssssssssssssssssssssssssssssss Rifles prevented the Battery from being built any higher than it 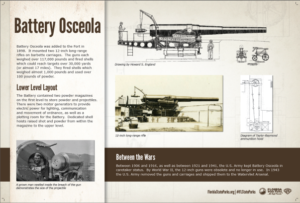 was.  Although it was completed too late to support Key West during the short-lived Spanish American War, Battery Osceola did serve from 1900 through both World Wars until it was deactivated in 1943.

Compared to the three-mile range of the original Civil War smooth-bore guns, the guns of Battery Osceola could reach targets at almost 17 miles (27.4 km).  Shells from Battery Osceola weighed over 1,000 pounds (453.6 kg) and used over 100 pounds (45.4 kg) of gun powder per round.  A pair of electrically driven ammunition hoists served to bring up shells and powder bags from the twin magazines on the first level of the Battery.