Wayside Marker 2 – To Guard the Harbor

The second marker gives a better idea of what the Fort looked like at the end of the Civil War.  It is along the sidewalk on your right as you continue along the sidewalk.  The beautiful illustration shows you what the three-story, trapezoidal–shaped fort looked like with all its guns in the casemates of the first two levels and the barbette emplacements on the open upper level. 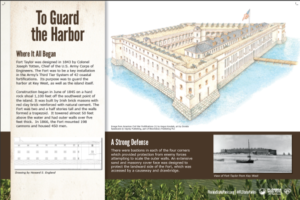 Fort Taylor was built on a rocky shoal completely surrounded by water.  It was located some 1100 feet (335.2 m) off the southwest tip of the island of Key West.  It has a granite foundation that was originally topped by a brick and concrete structure some 55 feet tall.  The technique used to build the fort dates back to Roman times.  They perfected the technique of building structures of stone or brick which they then filled with concrete.

By the end of the Civil War, Fort Taylor and its outlying batteries employed almost 200 guns and housed some 450 soldiers.  The photograph at the bottom right of the marker shows how impressive the fort was from the island in 1892.  It also shows how far off shore the Fort was before it was land locked in the early 20th Century.