Continuing along the sidewalk the tour enters the original wall of the Fort.   The marker provides a plan view of the current Fort and describes the various features of the Fort.  It is also color-coded to describe the various changes that were made to the Fort over its 100-year history of construction and active service.  On the left hand side, it provides a list of quick facts about the Fort as well as important events in the history of the Fort up to its formal opening in 1985 as a Historic State Park.  It also describes some of the features of the original construction including: gun rooms, cisterns, and tidal-flushed latrines. 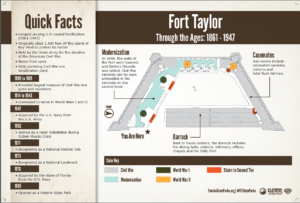 Beginning in 1898, the project to modernize the Fort led to the burying of most of the Civil War-era cannons and artillery.  During this period the height of the Fort was reduced to its present height to lower its profile and improve the field of fire for its new weapons.  Two new 12-inch non-disappearing barbette rifles and four new 3-inch rapid fire rifles were installed within the walls of the Fort.  These are described on markers toward the end of the tour.