Turn right at the Barrack and continue along the sidewalk in front of the Barrack until reaching the Sally Port.  It is indicated by the break in the sidewalk and the curved curb stones.  Marker 4 is located within the Sally Port itself.  Fort Taylor’s Sally Port is located in what was the middle of the gorge or landward side of the Fort.  It was the single point of entry for personnel, food, artillery, and ammunition into the Fort.  Access to the Fort was originally across a wooden causeway that ran for some 1100 feet (335.2 m) from the island of Key West out to the cover face and then by drawbridge into the Sally Port. 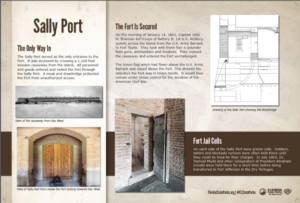 The key event in the history of Fort Taylor occurred early on the morning of January 14, 1861 when Union Army Captain John Brannan of the First Artillery Regiment moved his troops from the Key West Barracks located just off White and Southard Streets to the Fort without incident.  Florida had just seceded from Union and Captain Brannan took the initiative to occupy the Fort to prevent its capture by Confederate sympathizers in Key West.  Captain Brannan’s troops crossed the causeway and raised the drawbridge.  When the citizens of the island woke up that morning, they saw the U. S. flag flying proudly over Fort Taylor, sentries posted atop the Fort.  For the duration of the Civil War, the Fort’s fate was never in question.  The Union Army remained firmly in control of the Fort, the island of Key West, and the adjacent natural hard bottom harbor.

On each side of the interior of the Sally Port are two cells that were used from time to time to house unruly citizens, soldiers, and even notable Southern conspirators such as Dr. Samuel Mudd.  He was implicated in the assassination of President Abraham Lincoln in April 1865 and was incarcerated for several days at Fort Taylor.  Later he was transferred to the Federal Prison at Fort Jefferson where he was imprisoned for several years.