Wayside Marker 5 – Life in the Barrack

To the left of the Sally Port along the sidewalk is Marker 5.  It describes the daily life of the soldiers who served at Fort Taylor during the Civil War.  It lists the various functions served by rooms in the Barrack.  These include such accommodations as: offices for the units serving at the Fort and in Key West, sleeping quarters for soldiers and officers, kitchen facilities, dining rooms, infirmary space, and even two small chapels to serve the faithful.  The original three-story Barrack was also reduced to one story when the 1898 modifications were completed. 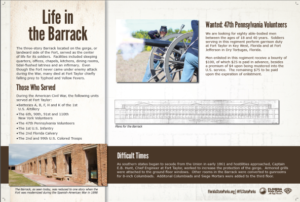 The marker also lists the various units that served at Fort Taylor during the Civil War.  These included regular Army units, as well as volunteer units from Pennsylvania, New York, and Florida.

Attracting volunteers during the Civil War was always a challenge.  The marker includes a poster that was successful in recruiting men for the 47th Pennsylvania Volunteer Regiment.  The poster describes the pay and benefits of volunteers who signed up.  Members of the 47th served valiantly at Fort Taylor, Fort Jefferson, and in a number of battles during the War.

After the Civil War ended, Fort Taylor was occupied only partially until it was abandoned by the Army in 1947.  From 1872 until 1893, Fort Taylor was only used periodically.  It was otherwise kept by an Artillery Sergeant assigned to maintain the weapons and ammunition.  Living alone at the Fort must have been eerie at night but also for the most part peaceful.  Between the Spanish American War and World War I and between World Wars I and II, it was basically kept in caretaker status.  The 256th Coastal Artillery used the Fort and its land reservation on the island for their summer bivouac.  The 256th exercised on the big guns of Battery Osceola from time to time.