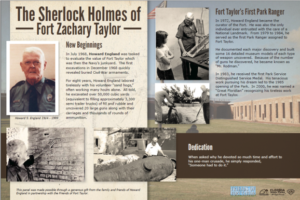 Her article chronicled Howard England’s work as the original explorer of the ruins of Fort Taylor, the first curator of the National Landmark site, and the first permanent Park Ranger at the Fort.  He worked for 16 and a half years to bring the Fort to public prominence and then into the Florida Park System.

Beginning in 1968, first as an unpaid volunteer, then as a State of Florida hourly employee, and finally as an official Park Ranger, he dedicated his life to the Fort.  Along with his volunteers, that he called “sand hogs” for all the underground work they did, he uncovered weapons and ammunition buried in 1898 in the South Curtain of the Fort.

Howard England’s single-handed accomplishments are truly heroic when you consider the volume of earth, rubble, granite, slate, and iron that were dug out of the Fort – mostly by hand and mostly by him.  In 1983, he was recognized by the Director of the Florida Park Service with the first Distinguished Service Award and medal.  In 2000, he was recognized as a “Great Floridian.”  Today’s Fort Zachary Taylor Historic State Park is a testament to his vision of a historic and recreational treasure for the people of Florida and the world.  When asked why he worked so tirelessly on the Fort, his simple reply was, “Someone had to do it.”