The next marker is located on the second level of the North Curtain.  It may be reached by climbing the granite steps of the spiral staircase behind Marker 7.  Across the way from the top of the staircase landing at the point of the bastion is the next marker, “Harbor View.”  The vantage point of the Northwest Bastion looks out over the main ship channel and the harbor.  There is always a variety of cruise ships, Navy and Coast Guard vessels, fishing vessels, and sailing craft that come and go on their daily business. 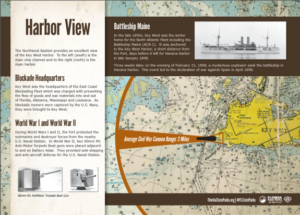 The diagram on the marker shows the effective range of the guns of Fort Taylor.  It covered the harbor as well as a good portion of the island.  Fort Taylor’s location was vital to protecting the military assets stationed at Key West and prevented the Confederacy from ever making an attempt to capture the island and the Fort.

By 1865, the Union Navy had almost 300 blockade runner vessels interned in the harbor.  They had been captured trying to run guns and ammunition to forces of the Confederate Army throughout the Gulf of Mexico and along the eastern coast of the United States.  Vessels also were captured trying to export cotton and other commodities from southern ports to England and France.

In December 1897, the U. S. S. Maine (ACR-1) was anchored in Key West harbor under the protection of the guns of Fort Taylor during the Christmas holidays.  On January 25th, 1898, she sailed for Havana harbor where she remained until February 15th, when she was destroyed with considerable loss of life in a mysterious explosion.  Reaction to the sinking of the Maine led in April 1898 to the United States Declaration of War against Spain.