The initial wayside marker provides an overview of the history of the Fort and its legacy.  Because of its strategic location off the southwest tip of the island of Key West, it guarded not only the inner harbor but also the principle sea lanes approaching the harbor.  Fort Taylor has been called “The Gibraltar of the Florida Straits.”  It served the U. S. Army at critical times throughout the period of 1861 to 1947. 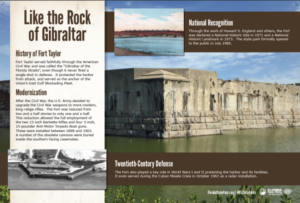 Realtors are fond of saying, “It’s all about location, location.”  Although it never fired a shot in anger, its strategic location was critical in protecting the United States interests in Key West, the Straits of Florida, and the Gulf of Mexico.

Fort Taylor was originally much taller than it is today.  Beginning in 1898, the Army Corps of Engineers reduced the fort from two-and-a-half to one-and-a-half stories.  This was done to facilitate the installation of larger long-range guns from those left over after the Civil War.  Fort Taylor’s “treasure” is the store of almost 200 guns and 500,000 rounds of ammunition that were buried within the remaining structure in 1898.

Fort Taylor is special in that it is one of the few forts recognized with the designations National Historic Site (1971) and National Historic Landmark (1973).  Both accolades were received before the site became a State Park and were due to the efforts of Howard England, Ida Barron, and Congressman Dante Fascell.

Return to TOP  NEXT